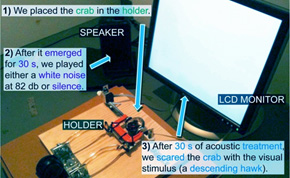 Our lab has developed collaboration with Dr. Daniel Blumstein of the UCLA Ecology and Evolutionary Biology department (https://www.eeb.ucla.edu/Faculty/Blumstein/). We are studying simple learning processes (e.g., habituation and sensitization) and attention (e.g., distraction) in the terrestrial hermit crab (Coenobita clypeatus). Our first publication in this series replicated, in a laboratory setting, the finding first reported in open field work that hermit crabs take longer to respond to an approaching visual threat in the presence of a loud noise (e.g., an anthropogenic sound) than without the noise (Chan, Stahlman, Garlick, Fast, Blumstein, & Blaisdell, 2010). To study this in the lab, we restrain the crab in front of a computer monitor (see photo above). After the crab has emerged from its shell, we present a video image of a hawk that appears to approach and descend on the crab. We found that crabs took longer to hide from the hawk when a loud white noise was simultaneously being broadcast near the crab, than when no noise was present. We interpreted this as a distraction-like affect produced by the loud noise, and found that louder and longer sounds were more distracting than were shorter and quieter ones.

Follow-up experiments using a dishabituation paradigm revealed the operation of two distinct processes, distraction and sensitization, both that were sensitive to the same manipulations of the intensity and duration of the exogenous auditory stimulus (Stahlman, Chan, Blumstein, Fast, & Blaisdell, 2011).

It turns out that the proximity in spatial location between the visual threat and the extraneous auditory stimulus is an important determinant of anti-predator behaviors, such as hiding and freezing, in hermit crabs (Ryan, Blumstein, Blaisdell, & Stahlman, 2012). Specifically, the more distal the auditory stimulus is from the location of the visual threat, the greater the effect of distraction. An interesting observation from this study was the significantly greater number of subjects that showed a freezing response in the concordant stimulus condition, in which the speaker was placed contiguous with the monitor. We speculate that this may have resulted from the noise emanating from the speaker drawing the crab’s attention to the speaker earlier in the trial compared to the no noise or discordant conditions. Thus, the crab would notice the visual threat earlier in the trial, when the hawk appeared smaller and further away. According to a predatory imminence view of responses to predators or fear stimuli (Fanselow & Lester, 1988), the further away the predator appears the more likely the subject will freeze to reduce detection. Virtually no freezing was observed in the discordant condition in which the speaker was placed behind the subject. As latency to withdraw into their shell was significantly longer in this condition than the other two (Silent and Concordant), we interpret this to indicate that the speaker was drawing the crab’s attention away from the monitor, thereby impairing detection of the descending hawk until it was much larger (closer). The closer the predator appears to be, the more likely the crab should take evasive action by hiding in its shell.

Another set of experiments on individual traits that are stable across situations for an individual, but that vary across individuals (i.e., personality traits) in the hermit crab revealed some interesting caveats for contemporary models of personality traits in animals, currently a hot-topic in the field of animal behavioral ecology (Watanabe, Stahlman, Blaisdell, Garlick, Fast, & Blumstein, 2012).

We continue to explore simple learning, attention, and perception in the terrestrial hermit crab in ongoing work.