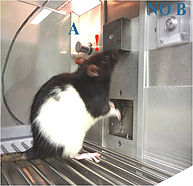 Humans are able to draw causal inferences from the effects their interventions have on the world. For example, we predict rain when we observe a drop in the barometer’s reading, but don’t expect rain if we tamper with the barometer to artificially lower its reading. Simple conditioning procedures have revealed similar reasoning capabilities in rats which we published in Science (Blaisdell, Sawa, Leising, & Waldmann, 2006). Specifically, a fter learning through Pavlovian observation that Event A was a common cause of Events X and Food (X<–A –> Food), rats predicted Food when presented with Event X as a cue but discounted the alternative cause A when they generated X by means of a lever press. This work has garnered a lot of attention (Faculty of 1000 Biology “must read”). More recently we have shown that rats treat their actions as special in causal learning. Discounting of a previous cause was only observed with interventions but not with other observable events; rats were capable of flexibly switching between observational and interventional predictions; and discounting occurred on the very first test trial (Leising, Wong, Waldmann, & Blaisdell, 2008). I discuss the implications of this work for a theory of agency in a recent book chapter (Blaisdell, 2008) for an Elsevier publication Learning and Memory: A Comprehensive Reference. This research has been funded by the National Science Foundation.

We have also shown that rats distinguish between the explicit absence of an event and the ambiguous absence of the event when it is hidden from view (Blaisdell, Leising, Stahlman, & Waldmann, 2009). Rats first learned a causal chain of Tone–> Light–> Food (arrows indicate the temporal order of events). Then they received a test probe trial with just the Tone with the light bulb covered or uncovered. If the light bulb was uncovered the rats could see that the light did not come on and thus they did not expect food (measured by the small amount of time spent nosing the feeder). If the light bulb was covered, however, the rats could not see that the light did not come on and they nosed the feeder a lot (i.e., had a high expectation of food). The rats behaved as if they believed that the light was present (though the bulb was covered) and thus the causal chain was not broken. We are currently exploring how rats process information about hidden events.

The relation of diet to cognition

Another issue our lab has become interested in is using the rat as a model for the effect of diet on human cognition. In particular, while the consumption of refined, processed foods (REF), a major component of the Western diet, have been linked to poor physical and mental health in human populations, much less work has been done linking these diets to cognitive outcomes. Rats provide the opportunity to manipulate an animal’s diet throughout the lifespan, exploring the effects on cognition. The video below describes our initial findings, published in Physiology & Behavior (Blaisdell et al., 2014), that rats raised on a REF diet exhibit a major reduction in motivation on tasks that involve both sucrose and water reward.