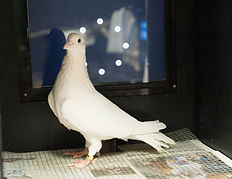 The role of associative learning in spatial maps

One line of ongoing research focuses on spatial cognition. Many animal species encode the spatial relationships among the objects around them – that is, they form cognitive maps. Spatial maps serve the animal during foraging and navigation. One line of research investigates how spatial maps are acquired. We have shown using touchscreen-equipped operant chambers that associative learning provides a mechanism by which spatial relationships between features of the environment are encoded and integrated. In the touchscreen chamber, pigeons learn the spatial relationships between visual landmarks (e.g., A—B) and between one of the landmarks and a hidden goal (B—Goal). Subsequent tests on landmark A reveal that pigeons had inferred an A—Goal spatial relationship by linking the A—B and B—Goal relationships (Sawa, Leising, & Blaisdell, 2005). These results replicate a previous open-field study (Blaisdell & Cook, 2005). We recently found similar results in the temporal domain using rats (Leising, Sawa, & Blaisdell, 2007). We have recently developed an automated open-field system called ARENA (Badelt & Blaisdell, 2008; Leising, Garlick, Parenteau, & Blaisdell, 2009) to investigate spatial and other cognitive processes in pigeons and rats. This work is currently funded by the National Institute of Neurological Disorders and Stroke.

Behavioral variability is a critical component to creativity and problem solving. An understanding of the sources of behavioral variability and the origins of new behaviors may reveal important insights into problem solving and creativity. In one set of experiments, pigeons were trained to peck at stimuli that varied in how reliably they signaled reward. Signals of low payoffs were found to increase spatial and temporal variability of operant screen pecks compared to signals of high payoffs (Stahlman, Roberts, & Blaisdell, 2010). We recently found similar results in a Pavlovian autoshaping procedure (Stahlman, Young, & Blaisdell, 2010). This was surprising because we had hypothesized that reward would only affect variability of behavior contingent on that reward. In the Pavlovian procedure reward was not contingent on behavior and thus variability seemed to have little utility. We are rethinking these processes and studies are currently underway to further explore the relationship between reward expectancy and behavioral variability. This series of experiments served as part of W. David Stahlman’s dissertation research.

Another series of experiments investigated choice behavior in both pigeons and college undergraduates confronted with the decision to explore versus exploit. Subjects viewed an array of 8 colored discs on the computer screen. Each disc signaled a different magnitude of reward payoff (grain for pigeons, points for humans). The assignment of payoffs to colors was randomized at the outset of each session, causing the subject to search for the highest paying discs to maximize reinforcement. These experiments will inform on the strategic processes engaged in complex choice behavior with an eye toward individual differences and their implications for assessing intelligence across both human and non-human animals.

While many animals seem able to respond to certain stimulus situations with a limited set of behaviors, it is also clear that complex animals, such as birds and mammals, can generalize beyond the training context and abstract their learned behavior to novel situations. We are investigating a number of ways that animals can learn an underlying structure in common across situations.

One of the most powerful forms of abstraction is perceiving relations, such as discrimination of Same and Different. We have provided a variety of evidence that pigeons can apply the Same/Different concept to a wide range of situations (e.g., Blaisdell & Cook, 2005; Cook & Blaisdell, 2006). We are currently adapting the Ravens Progressive Matrices procedure to study relational conceptual behavior in the pigeon. This procedure can be adapted to explore the level of relational complexity in any visual species, such as other birds, primates, and cetaceans.

In this research project, animals are presented with a grid of response locations, either on a touchscreen (in the case of pigeons) or on the floor (in the case of pigeons and rats). The animals are rewarded for selecting a particular subset of the locations, where this subset may conform to a simple pattern (e.g., checkerboard or cross) or be more random. If the simpler pattern is learned faster or more effectively, this indicates that the animals are sensitive to the underlying structure that differentiates the subsets. Further, the animals can then be presented with a larger grid and it can be examined how previous learning is generalized to the new response locations. This research can inform us about the ability of animals to learn structure to simplify their world.

The number refers to the location of the lever around the chamber in a clockwise direction. The other half of the animals were placed in a Violation condition, such that the final element of the sequence violated the general pattern:

It was found that the rats in the violation group performed significantly worse on the final element of the sequence. In collaboration with Steve, we have been examining an analogous task with pigeons using the touchscreen. We are finding that pigeons can also show evidence that they are sensitive to the underlying consistency or pattern present within the sequence.